How Israel Became the Leader in Web Accessibility

Web accessibility has become an increasingly important topic as more and more people in the world use the Internet. According to the United Nations Convention on the Rights of Persons with Disabilities,

access to information and communications technologies, including the web, is a basic human right.

Fortunately, the world has witnessed a significant change in perceptions and attitudes toward people with disabilities in the last decade. This paradigm shift is reflected, among other things, in structural reforms, disability support services, and increased emphasis on web accessibility regulation compliance. In this context, Israel ranks as one of the world’s leading countries, and for good reasons.

For one, a crucial part of Israel’s human rights and sustainable development policy lies in its obligation to defend and uphold the rights of its citizens with disabilities. This revolves around the recognition of the principles of equality, the worth of every human being as created in God’s image, and respect for all individuals.

Here are three important ways Israel distinguishes itself as a model to other countries in terms of protecting the rights of people with disabilities, especially on the web.

A Revolutionary Law on Web Accessibility

The Israel Standard (IS 5668) was established in 2013 as part of the Equal Rights for Persons with Disabilities Act regulations. Its objective is to protect the rights of Israeli citizens to full and equal access to information and communication technology.

What makes IS 5568 unique is that it is the first web accessibility law to expressly require widespread accessibility of all digital assets in both the public and private sectors. This includes all public agencies, for-profit organizations, and non-profit entities.

In contrast, web accessibility laws in some countries (such as Section 508 in the United States) require only federal government-affiliated organizations to make their websites accessible. In fact, at the time of this writing, U.S. federal courts are still divided in opinion on whether Title III of the ADA applies to websites as well as physical public spaces.

IS 5568: A Different Approach To Web Accessibility Non-Compliance 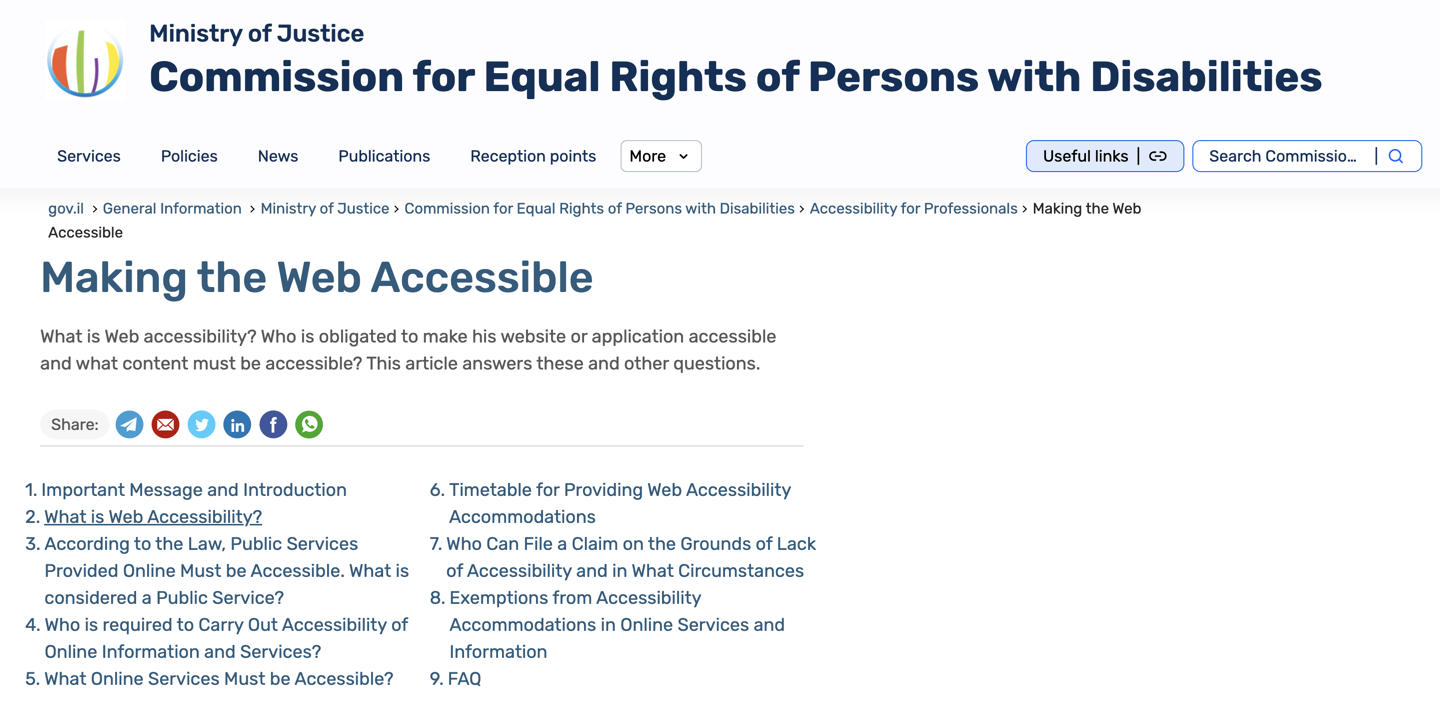 In addition, Israel sets out the most severe fines for web accessibility non-compliance under IS 5568. In Israel, if an individual comes across an inaccessible website, they can complain to the website owner to fix the accessibility issue. If the owner does not comply after 60 days, the complainant can sue and claim damages of up to 50,000 NIS.

Although web accessibility laws in some countries also award monetary compensation in lawsuits, the IS 5568 is unique for the following reasons:

Also, Israel sets two other web accessibility requirements that are among the most enviable in the world. As part of their accessibility obligations, organizations must disclose all the arrangements of their website and their services. This helps people with disabilities understand them and easily decide whether or not they want to become the organizations’ customers.

The second requirement is that the organization publish the contact information for its accessibility coordinator – usually a phone number and an email address. This gives customers with disabilities the opportunity to ask for help and offer suggestions to make the website more accessible if they desire.

Israel’s emerging assistive technology ecosystem also strengthens its position as a global leader in web accessibility. The country has solidified its reputation as the second-largest incubator of technology businesses in the world. Presently, over 100 companies in Israel leverage this formidable strength in the manufacture of assistive technology products.

Furthermore, Israel is home to several maker communities that foster innovation and the development of assistive technology solutions. Thanks to its culture of Tikkun Olam (which literally means “repairing the world”), Israel-based organizations coordinate global developer events to find affordable solutions to issues facing people with disabilities and other marginalized groups.

The World Health Organization estimates that 1 billion people in the world need one or more assistive products, as people with disabilities are the world’s largest minority group. As such, Israel is well-placed to service the increasing global demand for assistive technology solutions, thereby enabling global web accessibility.

The Israel Standard (IS) 5568 further advanced an active obligation to eliminate barriers limiting people with disabilities on the Internet. Together, these laws ensure that Israeli citizens with disabilities are fully included in all spheres of public life.

Also, reputable non-profit organizations in Israel play a key role in strengthening the country’s position as a leader in accessibility in general. For example, Access Israel hosts an annual conference that gathers leaders from countries across the world who look to Israel for policy and planning inspiration. Since its founding, it has become a leader in making businesses, government, academic, and non-profit institutions readily accessible.

To sum it all up…

For years, Israel has remained an undisputed global leader in cyber security and technological innovation. Now, it is also making its mark as a leader in web accessibility, thanks to its specific regulations and considerable progress in assistive technology innovation. As such, Israel remains in an excellent position to share its knowledge of web accessibility with a global audience to help drive better web accessibility outcomes across the globe.

Don’t forget to share this article if you enjoyed it 😊